One of the sad realities of owning a pet is that too often we end up having to say “Good Bye”.  While this is never easy, it can sometimes help if we try to focus on all of the positive things our four legged friends have brought into our lives.  Below is a very touching tribute one of our clients wrote about her beloved dog Austin.  Austin was a wonderful, loving and much loved dog – we are sorry that he is gone but we are glad to have the opportunity to share his story.  Thank you Maria.  RIP Austin.

Austin was born around September of 2001 – based on his adoption papers from the Sault Ste. Marie Humane Society from October 16, 2004.  He was a stray – also according to the papers – which I had not noticed until writing this today but his age as noted on those papers was quite exact – 3 years and 1 month.

He died on May 6, 2015 at an estimated age of 13 years and 8 months.  So this is my first point of gratitude as Austin lived a relatively long life considering he was a large dog and weighed around 105 lbs or more most of his life.

I was not his original adopter but he came into my life in February 2005 which was over 10 years ago and ended up staying with me.  This is my second point of gratitude that Austin happened to come into my life without me searching him out in any way.

I believe that I was able to provide Austin with a happy home where he was fed well (one of his favourite things), he was walked twice a day until he was too old to do so when it was reduced to once a day (another one of his favourite things), he was taken to the cottage (he enjoyed his home and his cottage), he was with his own other dogs (he really only liked his own family when it came to other dogs but he enjoyed his pack), and most importantly he was well loved (and I think he knew it).   Austin would wander away from the home of his initial adopter (more than once), he must have wandered away from someone else before that as per the Humane Society papers where I read today that he came in as a stray.  Austin never wandered away from either of his home or cottage once he was with me.  So I interpret that as he did not want to leave these homes.  This is another point of gratitude – that I truly believe that I did help give him a happy home and life.

Austin was very handsome – this big red boy who I always felt safe with.  Not that he ever threatened a human but he still made me feel safe such as when we were out walking in the dark on those cold winter mornings and evenings.   This feeling of security and protection with him is also with gratitude.

I did get his DNA tested and he had no Labrador retriever in him as guessed, he had many other breeds in him which meant he was a mix of mixes.  This made him a very unique one of a kind which I am also grateful for.

On the occasions that I was crying for whatever reason, Austin was the only one of my dogs that seemed to pick up on that and he would come and put his large head in my lap.  I felt that he was trying to make me feel better for which I will always be grateful. 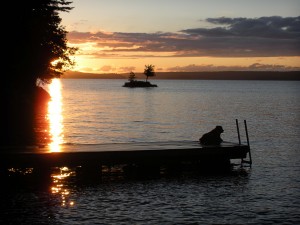 Austin became very ill, very quickly in January 2013 – two years and few months ago.  I rushed him to the veterinary animal hospital in Lansing Michigan having no idea that he was as sick as he was.  He had a massive tumor on his adrenal gland that was bleeding and causing many other complications due to the very high uncontrolled levels of adrenaline excretion.  He required a blood transfusion during the night and they reluctantly had to operate the next day due the bleeding of the tumor when they would have preferred to be able to stabilize him first.  Needless to say, this very tough dog survived all of this.  I was given this wonderful gift of getting him back from the brink and as a result, I appreciated him even more and often thought of how lucky I was to still have him.  I will always be grateful for the additional time that I was given with him.

In December of 2013, he started breathing funny through one of his nostrils and I took him back to Lansing.  They found tumors in his nasal cavity and sinus.  Amazingly they felt that they could remove his tumors surgically as the tumors had not yet invaded any other key structures.  So we went ahead with that as well as some limited radiation treatment.  He had a 7 inch scar from his forehead to just above his nose and when I saw him the day following surgery, he walked down the hall to greet me.  As you can see, I was able to enjoy him for another year and a few months following this.  I was so blessed to have been given this additional time with him again.

On Wednesday, April 15, 2015 Austin took a very weak spell when we went out for a short walk.  Dr. Palmer examined him the following day and by late in the day Friday, April 17, 2015 after blood work and ultrasound, he was diagnosed with a massive tumor on his other adrenal gland and what appeared to be tumor activity on his liver.  He was fairly stable for the next two weeks.  Another point of gratitude as he was able to enjoy some of the things he liked to do during that time and I was able to prepare for the reality that his time may not be long.

He started to slide fairly steadily for a few days after that and I was having difficulty getting him to eat – one of his most favourite things in life.  I reached the very difficult decision that all of us that love our pets hate which was that I had to let him go.  So on May 6, 2015 we let his spirit go.

When we lose our pets or others that we have deeply loved and connected with we tend to focus on the extreme pain that we feel.  I have been trying to focus on all the goodness and happiness that he brought me over all those years instead.  And even though trying to do this is difficult, I actually woke up this morning with this deep feeling of gratitude about the very special sharing of spirit and soul that I had with Austin and all the blessings that I received along the way with him.  I know that the tears will come and go but I truly feel that he is in a better place now that it was his time to move on to and that his spirit is still with me and always will be.  I feel very good about all the love I gave to and received from Austin.  We always get back so much more than we give. “