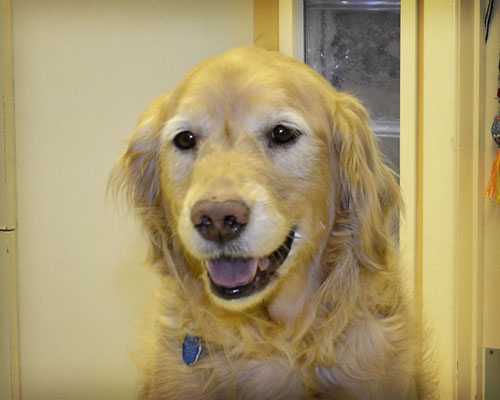 Baily is a seven year old Golden Retriever. Her owner brought her to Sault Ste. Marie Animal Clinic when she noticed that Bailey didn’t seem to be feeling well – she was lethargic and had vomited several times over the previous few days – she had even brought up a sock! 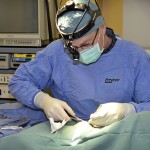 On physical exam, everything was pretty normal other than Bailey was dehydrated and she was tender when Dr. Palmer palpated her abdomen (carefully pushing and prodding the belly to feel the internal organs). He could feel a thickened, abnormal area in her intestines. By this time, Dr. Palmer was suspicious Bailey had an intestinal foreign body – in other words something in the intestines that shouldn’t be there and was causing a blockage. An intestinal blockage is a serious, potentially life threatening condition. Bailey’s owner left her with us so that we could do some blood tests, take x-rays and perform an abdominal ultrasound. Depending on what the dog has swallowed, many foreign bodies like an article of clothing, don’t actually show up clearly on x-rays – but we will see other changes such as gas in the bowel and swollen or distended areas in the stomach or intestines. While we could not see an actual foreign body on Bailey’s x-rays and ultrasound, there were other findings consistent with an intestinal blockage – ie lots of gas and swollen loops of bowel. Exploratory surgery was recommended. 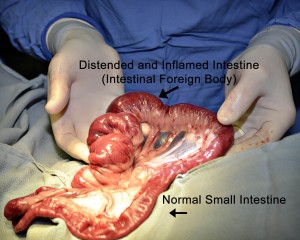 Baily was given an IV in her front leg and she was given a general anesthetic. Her abdomen was clipped and scrubbed and she was taken to surgery. Dr. Palmer made an incision into her abdomen and it didn’t take long to see that areas of her intestine were very abnormal – very swollen, inflamed and distended. Dr. Palmer made incisions into three different areas of the stomach and small intestine and removed large amounts of a carpet like material that was causing the blockages. No wonder Bailey had a tummy ache!!Bailey Sx2 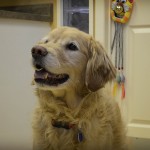 Bailey recovered well over the next few days – gradually being offered small amounts of food and water. She felt much better by the time she went home four days later and her owner reports she is doing well at home.