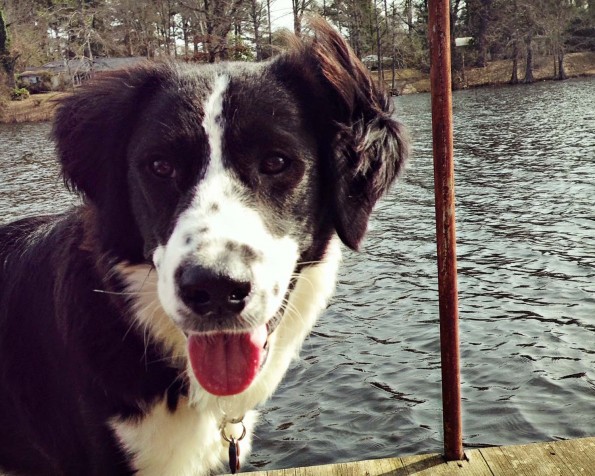 Finley’s owner spends part of the year in Louisiana and summers in Canada. She brought Finley to Sault Ste. Marie Animal Clinic because he had been diagnosed with heartworm disease in Louisiana just prior to coming home for the summer.

Heartworm is a parasite carried by mosquitoes that infects dogs and occasionally cats. It tends to be seen more frequently in warmer climates but we do see occasional cases here – particularly if the pet has a history of having travelled outside of the area (even into southern Ontario and Michigan). As the name suggests, the adult parasites live in the heart of the infected animal and can cause serious problems such as coughing, exercise intolerance and can be fatal if not treated. The adult worms in the heart reproduce and the immature forms or larvae circulate throughout the blood stream of the infected animal. The disease is transmitted when a mosquito bites an infected dog, picks up some of the microfilaria or larvae, and then essentially injects the microfilaria (larvae) into another animal when it feeds again. Over a period of a few months, the larvae will mature into adult heartworm that take up residence in the heart and the cycle is repeated.

For dogs and cats, most of the emphasis is placed on trying to prevent a heartworm infection from taking place. When taking a heartworm preventive such as Revolution or Trifexis, if a dog is bitten by a mosquito carrying heatworm larvae or microfilaria, the larvae will be killed by the drug and will therefore not go on to become adult worms in the heart. A dose of Revolution, Trifexis or any other monthly preventive will kill any microfilaria that has been transmitted to the dog by an infected mosquito within the previous month. With the wide selection of safe and effective preventives available on the market today, heartworm is a disease that is much easier to prevent than it is to treat. 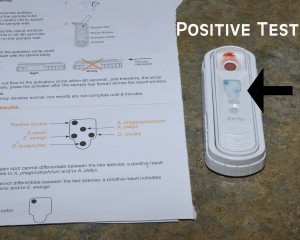 When we test dogs for heartworm disease, we are testing for the presence of adult worms (by testing for an antigen specific to the adult parasite), not the larval or immature forms. This means it will take at least six months or so after being bitten by an infected mosquito for a dog to have a positive heartworm test. In other words, when we do a heartworm blood test in the spring, we are actually checking to see if the dog was infected the summer before. This is why puppies don’t need a heartworm test prior to being started on a heartworm preventive if they are less than six months old but we will recommend a blood test the following spring.

So to clarify, if a dog tests positive (on an antigen blood test) for heartworm disease it means it has adult heartworm present in the heart. This requires a different treatment than just giving a routine monthly preventive as monthly preventives only kill the larvae and not the adult worms. Different drugs are used such as adulticides (ie killing the adults) and it is riskier procedure since killing a large number of adult worms in the heart can make the dog very sick. However, if not treated, dogs will likely experience clinical signs and become quite ill.

In Finley’s case, his owner noticed that he was not as active as he had been and did not appear to be feeling 100% on his runs. The positive heartworm test indicates he has adult worms in his heart. It is likely he was infected with the microfilaria or larvae before he was even adopted, and now that several months have passed the larvae have matured and migrated to the heart as adult worms. We are initiating a treatment protocol for him that will aim to kill the adult worms in stages (graded kill protocol) so that his body can better handle the side effects of the worms dying rather than overwhelming it. The entire treatment process and follow-up will take a few months. Fortunately, Finley is a young and otherwise healthy dog – his prognosis for a complete recovery is excellent.