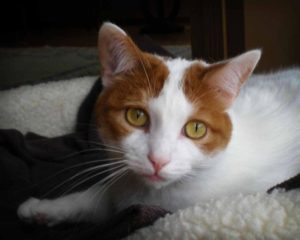 In Opal’s Story Part 1, we learned from a liver biopsy that Opal, a sweet young spayed female cat, was suffering from Hepatic Lipidosis and feeling miserable. There were many questions to answer: What is “Hepatic Lipidosis”? Why does it occur? And, most importantly, what could we at Sault Ste. Marie Animal Clinic do to help Opal?

Hepatic Lipidosis is commonly referred to as “Fatty Liver Disease” and it is one of the most common forms of liver disease diagnosed in cats. It is, in a sense, a result of the way cats evolved as predators. From an evolutionary standpoint, cats were designed to hunt small rodents and birds and so their metabolism is geared towards eating multiple small meals that are high in protein. Traditionally, before being domesticated, cats would rarely carry large stores of body fat.

However, since becoming domesticated, the average cat usually carries a significant reserve of body fat. If for some reason, a modern house cat stops eating (illness, starvation, overly aggressive dieting, dental pain etc.) the body responds by mobilizing fat stores and sending them to the liver to be processed into lipoproteins. The cat’s liver, which was never designed to handle the large volume of fat, becomes overwhelmed and fails. Clinically, at this point we will see signs such as anorexia (not eating), rapid weight loss and icterus (high levels of bilirubin causing yellow skin, gums and whites of the eyes). Complicating the issue is the fact that cats require a high protein diet – when they stop eating protein malnutrition develops quickly.

Fortunately, most of these changes can be halted and even reversed if the cat starts consuming enough calories. The treatment for fatty liver therefore involves feeding a good quality high protein diet along with supportive measures such as fluids, antibiotics and other medications including antioxidants (SAMe), appetite stimulants and vitamin B12. The problem? Sick cats do NOT want to eat! Poor Opal was feeling lousy! She had NO interest in eating food. Without adequate nutrition, her liver would continue to fail and she would die – Opal was a very sick little cat. We had a long discussion with her owners about our options. We knew that it would be very difficult if not impossible to get Opal to consume enough calories on her own or by “force feeding” The solution? A feeding tube!

Under general anesthesia, a rubber tube was placed into Opal’s esophagus from the left side of her neck. This esophagostomy tube allowed first us then the owners to use a syringe and special diet mixed with water to get food directly to her stomach. At first, the meals had to be very small and very liquid so that Opal would not vomit. They also had to be given several times throughout the day.

Since the tube came out through Opal’s neck, it was very important to keep the area clean and to keep Opal from scratching or chewing the exposed portion of the tube. This is when Opal’s owner discovered that Opal wore the same sized clothes as the average doll! Whenever Opal came in for a recheck she would be wearing an article of clothing to protect the tube. She was always the best dressed cat in the hospital!

Opal’s owners were very dedicated and did an excellent job of caring for her at home. Within a few weeks, Opal started to feel better. Her blood work improved, she gained weight and she even started to eat a little on her own. As she continued to improve and eat more on her own, her owners were able to gradually decrease the amount being fed through the feeding tube. By six weeks, Opal’s blood work had improved enough and she was eating sufficient amounts of food on her own that we were able to remove the tube.

For several months, Opal did very well at home and we were very optimistic for her future. Unfortunately however, this little kitty’s troubles were not over just yet – stay tuned for Opal’s Story Part 3!