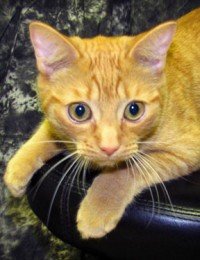 Oscar is the latest addition to the Sault Ste. Marie Animal Clinic team. He was brought to us last fall (2011) by the Humane Society as a tiny kitten. He had been found by a city garbage truck driver and he had a badly broken leg. Originally scheduled for euthanasia, he was so tiny and adorable that we said we would try to fix his leg then find him a new home. The Humane Society, happy for the little guy to have a second chance, gladly signed him over to us. We named him “Oscar” (since he was found in garbage!) and we set about trying to fix him. 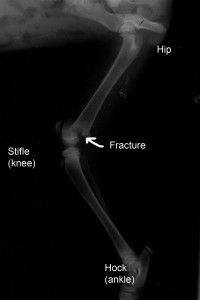 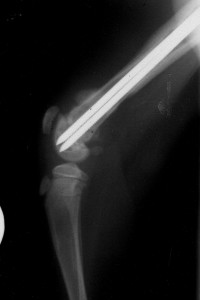 X-rays revealed a fracture of the right femur (thigh bone) very close to the stifle (knee joint). Oscar was immediately scheduled for surgery that involved putting a metal pin and some wires in the bone to stabilize the fracture. The surgery went well and the bones set nicely together. Unfortunately however, it soon became apparent that Oscar had also suffered severe nerve damage to the lower part of the leg. Even though the broken bone had been set and stabilized, the right hind leg dragged uselessly behind.

Now we didn’t know what to do! Should we amputate the leg? Should we wait and see? For several weeks, poor little Oscar gamely scrambled around on three legs. Because the leg dragged on the ground, he soon developed abrasions (sores) on the foot. We had to fashion a little splint to protect the foot and hold it in the proper position. At this point, the plan was still to find him a new “Forever Home” once we had a better idea of what the final impact of the leg injury would be. We were concerned we might end up needing to amputate the leg. In the meantime however, Oscar was progressively winning us over with his unwavering spunk and sweet disposition.

A few more weeks passed and we finally had some good news…..Oscar was showing signs of regaining some nerve function in the leg! Gradually, we were able to remove the splint as he progressively regained use of the leg. However, it wasn’t too long before yet another problem became evident – Oscar’s right hind leg wasn’t growing as fast as the left. When Oscar suffered the original fracture, the “growth plate” (the small area of bone that is responsible for the bone increasing in length) had been damaged. Once that area of bone stops growing, there is unfortunately little that can be done to fix it.

Fortunately, for some reason (whether genetic or due to his rough start in life), Oscar has ended up a very small cat. At a little over a year of age, he is the size of many 6-7 month old male cats. His right leg has ended up approximately 1.5 cm shorter than his left which has left him with a permanent limp, or as we like to say, swagger! Considering where he started and considering that he almost lost the leg we think that’s not too bad.

His spirit and determination won us over completely and we have long since given up any thought of finding him a new “Forever Home”….he already has one here with us! He is part of our team and enjoys visiting the hospitalized patients and watching everything that goes on in the clinic. Look for the little orange cat with a slight limp running about the clinic the next time you are in to see us. That’s our Oscar!