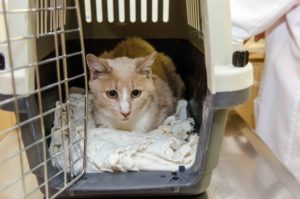 Puddingstone, a 9 year old female ‘rescue’ cat was brought to us because her owner noticed she was not eating and was very lethargic. On physical exam, Puddingstone was clearly not feeling well. She had dull eyes, a depressed manner and she was thin and appeared uncomfortable when her abdomen was palpated. Dr. Palmer suspected she had an enlarged, abnormal uterus (there was no known history of her having been spayed in the past) and was concerned she had pyometra – a serious infection in the uterus that can make an unspayed cat very ill. 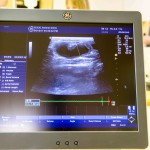 The tentative diagnosis of pyometra was further supported when the ultrasound of Puddingstone’s abdomen showed a large, tubular, fluid filled structure in the lower abdomen. At this time, Puddingstone was admitted into the hospital, placed on iv fluids, given medication for pain and blood tests were run to make sure her other internal organs were function normally. There were mild changes on her blood work that were attributed to stress and within an hour of arriving at the hospital, Puddingstone was given a general anesthetic and taken to surgery. As expected, the exploratory surgery revealed Puddingstone’s uterus was very enlarged and full of mucus and fluid. The uterus and ovaries were removed and Puddingstone recovered from the anesthetic uneventfully. puddingstone2 (3 of 4) 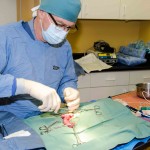 By the next day, Puddingstone was eating and after two days, she was clearly feeling better – coming up to the front of the cage looking for food and to be petted. She was able to go home after spending 48 hrs in the hospital.

The risk of pyometra is one of the major reasons we recommend all female dogs and cats are spayed. In Puddingstone’s case, she recovered well and relatively quickly because her owner brought her in before things got worse but pyometra can be a life threatening disease if not diagnosed and treated in time. 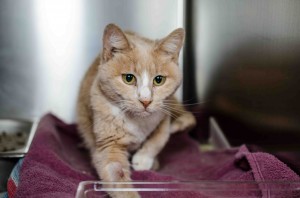