Meet Spike, a four year old English Bull Dog. In January of 2013, Spike presented to Sault Ste. Marie Animal Clinic after having been hit by a car. Initial examination revealed that Spike had suffered some cuts and scrapes, was sore on the left hind leg but fortunately seemed okay otherwise. Satisfied that Spike was stable; we sedated him and took some x-rays – which revealed the reason why he was limping. Spike had suffered a coxofemoral luxation or a dislocated hip. This is not an uncommon injury when dogs suffer a severe blow such as being hit by a car. The force of the impact literally knocks the ball part of this joint right out of the socket. If it is identified right away, we will attempt what is called a “closed reduction”, where under anesthesia, we manipulate the hip back into place. Sometimes this is all we need to do and with rest and a little luck, the hip joint will stay in place. In Spike’s case however, even though the hip went back into place nicely it did not stay there. Spike would need further intervention to fix the problem. In many cases, we are able to perform surgery at Sault Ste. Marie Animal Clinic that will secure the hip in place. In Spike’s case however, because of his unique “Bull Dog” physique, we consulted with the veterinary orthopedic specialists at Michigan State University Teaching Hospital and recommended his owner take him there for further treatment. 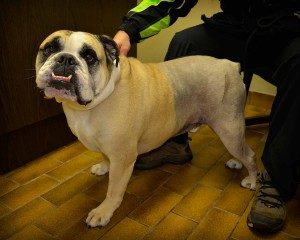 Spike and his owners made the trip to Lansing, Michigan where the surgeons decided that a Total Hip Replacement (THR) would be the best option for him. Spike came through the surgery with flying colours and this picture shows him two weeks later, when he came back to us for a recheck and to have his skin staples removed. He is happy, very comfortable and pulling on his leash like a tank! He is doing great! Way to go Spike!

P.S. No word on how the car that hit him is doing 🙂