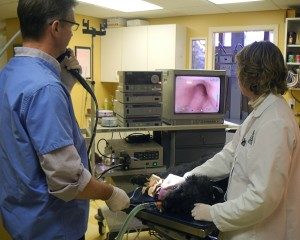 Cosmo, the 5 year old Goldendoodle clearly wasn’t feeling well. He was vomiting and he looked miserable. Cosmo has been known to eat things he shouldn’t in the past so when he wasn’t feeling well his owner brought him to Sault Ste. Marie Animal Clinic right away. Given his history, the most likely diagnosis was a gastric foreign body (something in his stomach that shouldn’t be!) and the decision was made to perform video endoscopy.

Dr. Palmer gave Cosmo a general anesthetic and inserted a video endoscope down his esophagus into the stomach. Bingo! Amid some food and other stomach contents, we could visualize a dark fabric density object which we were able to grasp with the forceps and gently pull back up through the esophagus . It was an athletic sock – one of the most common things we see as foreign bodies.

It was fortunate for Cosmo and his owner that they brought him to us while the sock was still in his stomach. If it had started to travel through the intestines, we might not have been able to see it or remove it with the scope. The sock could have caused an intestinal blockage and required major abdominal surgery to remove it. However, twenty four hours after having the sock removed via the endoscope, Cosmo looks and is acting “as good as new”.