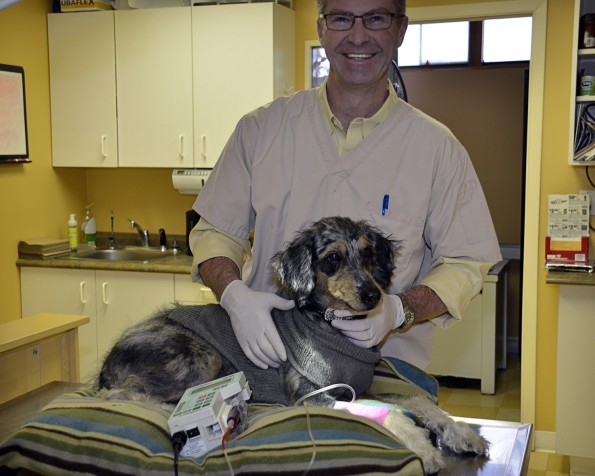 We are happy to report that Piper is still doing remarkably well with her chemo treatments.  She is now into her 5th month of treatment for lymphosarcoma (cancer of the lymph nodes) and other than a dramatic change in her hair coat, you would never know there is anything going on.  She is still very much herself and doing her normal things – eating well and leaving a trail of toys around the house.  She weighs more than she ever has and her blood work is all within normal limits.  She can still run like the wind and torments the cats on a daily basis.  In other words, her quality of life is excellent so far and we are very glad we have made the decision to treat her.  It is not a cure but it is giving us extra time (good quality time) with her that we otherwise would not have.

We are following a chemotherapy regime (modified Wisconsin CHOP protocol) that involves four different drugs given on a rotating basis.  Initially, the treatments were once a week but now they are given once every two weeks.  Piper is an excellent patient and is very co-operative – lots of tasty treats make the treatments a little more pleasant.

As mentioned, the biggest change we have noticed is in her coat.  Being a “Doodle”, Piper has always had a very full light coloured poodle coat that gave her a teddy bear or muppet like appearance.  Since starting chemotherapy however, Piper has lost most of her fuzzy coat and it has been replaced by shorter and much darker hair.  You can now see her blue merle colouring – she actually looks like an Australian Shepherd!  Because her new coat is so short, she does get cold – no problem though – she is acquiring a lovely collection of sweaters.

When The Vet’s Pet Gets Sick – Piper’s Journey

When The Vet’s Pet Gets Sick – Update on Piper