With heavy hearts, we said goodbye to our much-loved Aussiedoodle, Piper, on Saturday, May 31/2014. We had diagnosed Piper with Lymphoma, a form of cancer of the white blood cells, in September 2013 and she had been on chemotherapy ever since. Piper tolerated the chemotherapy remarkably well and lived an excellent quality of life for the past several months. When the drugs stopped working and she came out of remission, the change for the worse was dramatic and undeniable within 48 hrs. By this point, we had exhausted all reasonable treatment options and it was clear that euthanasia was the kindest thing we could do for her. As difficult as it was to actually do, we knew it was the right thing. 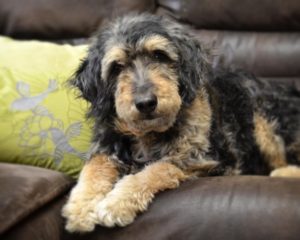 Last fall, we were devastated by her diagnosis – she was only six years old and it seemed so unfair that such a good dog could be cut down in the prime of her life like that. We are grateful however, for the chemotherapy protocols that gave us a wonderful extra eight months with her. We knew from the beginning that it would not cure her but that it could Piper April 2014 webprovide her with good quality time and it really was ‘good quality time’. Within days of starting the treatment protocol her appetite and energy levels improved significantly. The biggest side effect we saw overall was that she lost most of her light grey hair coat – but it grew back in a pretty dark tan and steel grey and for the first time in her life she looked more Australian Shepherd than poodle. She acted so energetic and happy that it was hard to believe she was sick – she certainly didn’t seem to think she was! We feel very good about having made the decision to pursue chemotherapy for her. 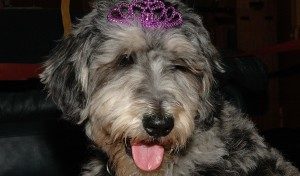 As the days pass, the reality of her being gone is slowly starting to sink in. The house seems empty without her enthusiastic greetings or the gentle thump, thump of her tail letting us know where she was. She approached everything with enthusiasm and made the most mundane daily tasks seem like fun. She loved people, never even remotely considering the possibility that she might not be included in whatever activity was taking place or that someone might not be as absolutely thrilled to see her as she was to see them. We had a magnet on our door that said “Beware of the Aussiedoodle” and friends and relatives came to know that a visit to our house or a ride in our car likely meant having Piper plastered to their side or demanding belly rubs – fortunately most didn’t seem to mind. She also provided tremendous comic relief – you just couldn’t look at that face and stay sad or angry. She tried very hard to ‘talk’ to us with various barks, woofs, rumbles and comical sounds – we always thought someday we would figure out what she was trying to say 🙂 Piper was a unique, lovable, huggable character and she was very much a part of our family. She will be missed more than words can say. 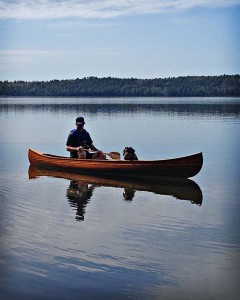 You can read the rest of Piper’s story in Oscar’s Success Stories:

When The Vet’s Pet Gets Sick – Piper’s Journey