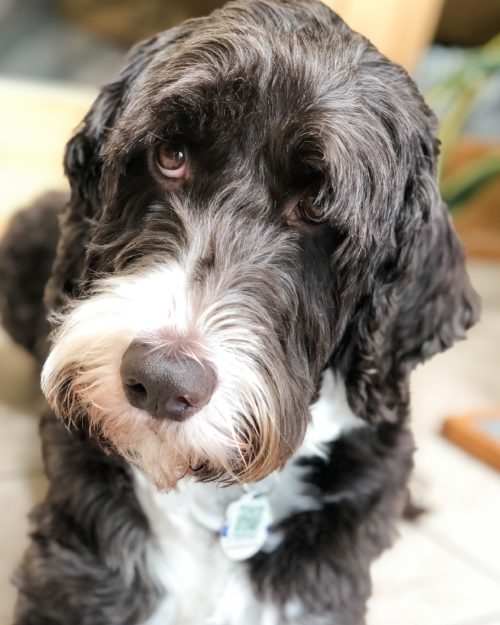 (The team at Sault Ste. Marie Animal Clinic are not only pet lovers but pet parents/pet owners as well. As such, we too experience the many joys and occasional concerns that come with having pets in your life. Sometimes our pets surprise even us with the predicaments they get themselves into – and we like to share these with you so that you can hopefully learn from our experiences. Our latest ‘Teachable Moment’ involves Hudson, the Palmer family’s almost 6-year-old Portuguese Water Dog.)

Easter Sunday was a typical weekend day for Hudson as he divided his time with various family members both inside and out, but mostly lounging on the couch inside. At one point he accompanied Dr. Palmer and Rebecca Palmer (4th year Glasgow Veterinary Student) to Dr. Palmer’s wood working shop where they were making wooden bangle bracelets on a lathe.

Shortly after dinner, Hudson started to shake his head and flap his ears quite forcefully. Closer inspection revealed redness and slight swelling of the ears, around the eyes and muzzle/lips. Assuming Hudson was having an allergic reaction to something he had encountered throughout the day, we gave him an injection of an anti-inflammatory steroid and treated his ears with a soothing ointment. Dr. Palmer thought perhaps he had encountered some sawdust from Black Walnut or other exotic wood (which can sometimes cause varying degrees of irritation or toxicity) that the bracelets were made from but since he was not observed eating it, we assumed the exposure was minimal.

Hudson seemed to settle and rested quietly. A couple of hours later however, he became very depressed and unable/unwilling to stand. He then vomited his dinner…. accompanied by wood shavings! By this point, we had put two and two together and recognized that Hudson was experiencing toxicity from eating Black Walnut sawdust. We did blood work, put him on intravenous fluids, treated his symptoms and consulted with Animal Poison Control to make sure we were following the best protocol. He was a ‘textbook’ case showing all the clinical signs of black walnut (Juglans nigra) exposure – erythema (redness of the ears and face), gastrointestinal upset and neurologic signs (sedation, ataxia and hindlimb weakness). Even with treatment, Hudson spent 24 hours feeling miserable. Fortunately, by 36 hours he was feeling much better and is now 100% was back to normal.

The moral of this story? NEVER underestimate your pet’ ability to eat something they shouldn’t! Dogs can also learn to be a little sneaky and snatch food or other things when no one is looking – nobody saw Hudson eat the sawdust. Sources of toxins can catch pet owners by surprise as well. Hudson spends many hours in the wood working shop – he even has a bed there – and usually does not bother with anything so perhaps we let our guard down. In over 30 years of practice, we have never seen a dog have a toxic reaction to Black Walnut – it was not something on our ‘radar’. Although eating the walnuts, shells and wood/shavings from the Black Walnut tree has been documented as a potential source of the toxin juglone for dogs and horses, it is not something we see commonly – especially in this area (the wood Dr. Palmer and Rebecca were using was from a tree on the farm he grew up on in Southern Ontario). We wanted to share this story so that any wood workers would know to be extra careful with their pets when working with exotic woods.